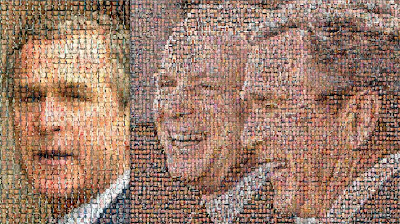 The Faces of Death

I happened to look up this morning as I was glancing over the smarmy chosen few purportedly “news” stories being touted by the corporate media and saw this accidental imagery on my husband’s computer screen. I asked him to do a screen capture and send it to me. It doesn’t show either composite picture in its entirety but it gives a chilling visualization of how far we’ve come — in the wrong direction — since the first portrait of bUsh (emphasis on U because you haven’t acted) created from the faces of our dead due to their handling and exploitation as corporate mercenaries circulated on the internet. Look how far we’ve come. All the way from one psycho bUsh to psycho wannabe Insane McCain. Yes, I’m pissed, outraged , grieving, and murderously agitated that we’ve reached tombstone (definitely not a milestone as milestones are supposed to mark achievements) publicly acknowledged number of 4000 U.S. military dead. And unfortunately this number doesn’t come anywhere close to showing the HORRIFIC numbers actually associated with this immolation of a people.

I’m going to go throw up.

Previous Post: « The More I Learn About Hillary the More Frightened I Become
Next Post: The Buzz about Hillary & Watergate »