Repost of article because the IVAW and their mock prisoners want the word out: 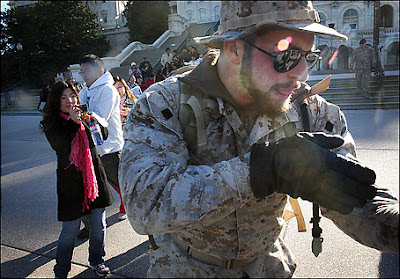 Far From Iraq, A Demonstration Of a War Zone

There’s a lot of weirdness every day in the capital city, but this one pushed the envelope: 13 Iraq war veterans in full desert camo going on “patrol” from Union Station to Arlington National Cemetery. They carried imaginary assault rifles, barked commands, roughly “detained” suspected hostiles with flex cuffs and hoods — and generally shocked, frightened and delighted tourists and office workers.

“How does occupation feel, D.C.?!” shouted Geoff Millard, head of the local chapter of Iraq Veterans Against the War, who previously served on a brigadier general’s staff in Tikrit.

They cut a swath across downtown, taking imaginary sniper fire and casualties on the grounds of the Capitol and the Washington Monument, scouting the White House, performing mock arrests at the foot of the Capitol steps and a vehicle search on the Mall. At the Capitol, the veterans almost got detained themselves by civilian peace officers with real guns. The vets brought their act to a military recruiting station on L Street NW and concluded with a memorial ceremony in the cemetery.

The 12 men and one woman included one veteran of Afghanistan, and they represented the Army, Marines and Navy. They were young, intense, disillusioned. Home from the war, on yesterday’s fourth anniversary of the Iraq invasion, they wanted to bring the war home to Washington.

They called it Operation First Casualty — citing the adage that truth is the first casualty of war. The premise of their guerrilla-theater incursion was that, for all the yellow ribbons and “support the troops” sloganeering, life goes on at home pretty much oblivious to what it’s like for American soldiers and Iraqi civilians.

“When I got home, the hardest thing for me was realizing the war does not exist here,” said Aaron Hughes of Chicago, who was a sergeant in a transportation unit that convoyed troops and supplies in and out of Iraq from Kuwait.

The gonzo lost patrol stayed earnestly in character for much of the day, which meant creeping down the arcade outside Union Station in formation at about 8:15 a.m. “Danger area ahead,” warned patrol leader Garett Reppenhagen, a former Army sniper with the 1st Infantry Division.

They held their left arms out straight, like gun barrels, and gripped imaginary triggers with their right hands. He signaled for his men to sprint two by two through the arcade, past the Thunder Grill, to the Metro entrance.

Outside the Metro station were about eight civilians with white T-shirts over their winter clothes. In real life, they are antiwar activists. On this day they played suspects and bystanders in a war zone patrolled by an edgy occupying army.

Shouts and curses, shoving and arm-twisting, from Reppenhagen and his men: “Don’t move!” “Get down on the ground!” “Do I have to shoot you, or are you going to stay still?”

The soldiers twisted on the cuffs and adjusted the hoods, then ordered, “Get ’em out of here!”

In two frantic minutes the scene was over; the civilians moved on to the next location outside CNN and Fox News, and the soldiers continued their patrol.

“Way off the hook,” said a man on his way to work.

This is the way it is on patrol, the vets said. You can’t take chances, which means you can’t treat people like human beings.

Motorists halted for the strangely alert, cautious, crouching column. Men and women in the workaday uniforms of trench coats and business suits got tangled in the advance. While explanatory fliers were handed out, not everybody got the message.

“I don’t know what they’re doing, but they’re in everybody’s way,” said Janet Ruck, a career counselor in Washington. Upon hearing an explanation, she said, “So they were intentionally getting in people’s way. I don’t think that people have lost touch or forgotten [about the war]. I don’t think this is the way to get people to connect.”

“At first I was scared,” said Maria Rave, a restaurant owner from Maine who saw the platoon reenact visions of a sniper attack, near the Smithsonian Castle.

“We weren’t sure what they were doing, but it’s kind of cool,” said Glenn Gebhart, an IT consultant from Rochester, N.Y. “We’re all in favor of the message,” said his friend Chris Santillo, a martial arts teacher from Alexandria.

All day, an alien context was being imposed on familiar streets and tourist zones. The new frames of reference made for little epiphanies. For example, through the eyes of a soldier, potentially hostile cities all look alike. The soldier reduces every feature to threats or places of shelter.

“We got a long danger area!”

No, those are the steps and promenades to Upper Senate Park, adjacent to the Capitol. The soldiers took cover behind the marble.

“I feel like Forrest Gump, desert style,” said Mark Lachance of Philadelphia, formerly a scout in the 1st Infantry, now zigzagging up to the Capitol.

U.S. Capitol Police officers held the patrol on the grass briefly, mulling its lack of a permit, then let the vets go. A mounted Park Police officer approached the patrol. “Do you guys have any weapons?” she asked.

They are all members of Iraq Veterans Against the War, a group that claims about 400 members nationwide and calls for immediate U.S. withdrawal. “We are the troops,” said Kelly Dougherty, co-founder of the group. “Supporting the troops means not sending us into a war based on lies.”

After lunch by the Washington Monument — five of these antiwar vets are vegetarians — it was back on patrol. The day ended at Arlington Cemetery. They saluted the fallen, remembered dead friends.

Then they removed their uniform shirts, a symbolic leave-taking from the war and from the roles they had taken up once more. Many had found it troubling, acting like soldiers again.

“I definitely feel it,” Reppenhagen said. “We don’t want to act like soldiers. We felt we had to for today to help express the honesty of the war. But we want to revert back to being veterans and civilians.”