Last night I went to see the Chicago 10 (2007) at The Loft last evening. Director Brett Morgan, a combination of historic footage and animation, this project has been panned by corporate media critics and surprisingly suggested as a potential educational tool for parents to use to instruct mature teens about history by other reviewers. Most film review sites seem to have a mixed review. 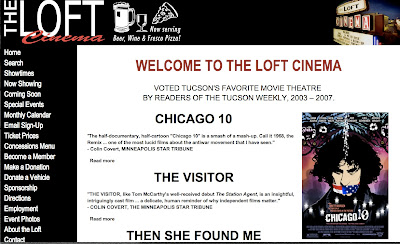 My original experience with the Chicago 8 (10 now per this movie’s inclusion of defense attorneys Weinglass and Kunsler) is just as divergent from the mainstream as my critique of the movie. I won’t say watch it or don’t watch it although I definitely lean to the former. That is up to you.

What I find most compelling about the film are things that few if any of the “top” reviews choose to comment upon — metacomentary, framing for a new generation, the ability to capture the essence of a very complex time. Actually, for me all the events of 1968, MLK Jr.’s assassination, RFK’s assassination, the Chicago Democratic Convention, will always pale in comparison to my brother catching a gut full of shapnel as he lifted a mortally wounded buddy into a medivac chopper on his birthday on August 4th, 1968. I was 11 years old.

Of course there are the 2008/1968 parallels. War that the country no longer supports, a divisive Democratic party that could end up losing the fall election to the Republican nominee. A profound sense of hope and and equally profound sense of despair that pulsates just below the surface of every political discussion.

The use of now common academic/analytically informed protest tactics and the acute understanding of the role of the media in shaping political thought and dissent was brought to mid/late 20th Century U.S. by the Yippies. The contemporary grandfathers of Billionaires for Bush, CODEPINK, and YellowCakeWalk were Abbie Hoffman and Jerry Rubin. (Be careful crossing the street all you street theater of today types.) My life partner in cultural critique says I should mention The San Francisco Mime Troupe.

The concept of “The Jester” who embodies the upside down analysis of things not spoken about in kingdoms and monarical courts is an ancient concept. Successful street theater is the stuff of intellectually trained and culturally astute critics of the powers that be. Laughter mixed with the possibility of death is edgy and illustrates that all humor comes from discomfort.

No other film of which I am aware of so effectively presents the layers of meta-messages that bombarded the TV watching U.S. population in 1968. The trial scenes in the film were exclusively presented as animation — this perfectly addressed the surreal nature of the trial…. of course it also was necessary as there were no courtroom cameras allowed in the winter of 1969 and 70 the date of the trial.

I definitely think that Tucsonans of the activist stripe or anyone interested in the presentation of historic information to contemporary audiences would be rather negligent if they did not take advantage of the local showing of this film on a large screen and get over to The Loft between now and Thursday, May 29th, 2008.