Michele Obama’s appearance in downtown Tucson probably drew some folks away from Ann Wright’s talk today about brave individuals who raised voices of conscience against illegal and immoral actions by our government since 2001.

Ann Wright spoke at the University of Arizona Bookstore this afternoon. It wasn’t a feel good talk. No one whose stories are in DISSENT Voices of Conscience has won any medals, most are no longer in the careers they were busily building when they discovered violations of the letter and spirit of the law of the United States of America that they served through military or civil service. Col. (ret.) Ann resigned her Foreign Service position on March 19, 2003 as the U.S. began invading Iraq. 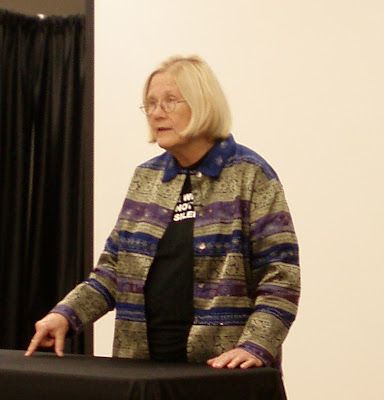 What was feel good was the news Ann brought with her from downtown and the trial and sentencing of three protesters arrested inches inside the gates of Fort Huachuca last November during SOA sister action protests. Today Betsy Lamb, Mary Burton Riseley, and Franciscan Fr. Jerry Zawada were admonished for not keeping their protests within the law. But in an amazing voice of reason from the bench Judge Marshall encouraged protests to continue protesting against illegal actions by the U.S. Government and spoke of the duty to do so, but within the law. She spoke of knowing that incarceration would do no good as each would protest again. The three were each found guilty and sentenced to time served, two years of probation and a $5000 fine that can be paid as a fine or via community service hours at the rate of $100 credit against the fine for each hour of service. No jail time. Putting a value on protest of $100 an hour. This is a well reasoned sentence voiced with justice.

If only the individuals whose stories Ann Wright tells in her book DISSENT had the scales of justice actually action with judgment. But truth telling is not valued in this country, nor in the UK nor Australia it seems.

Elizabeth Wilmshurst advised the British Government that aggression toward Iraq would violate international law. They ignored her counsel. She had to resign and is now working at a think tank. Jessalyn Radack was devoted to justice and worked to maintain fair and just treatment for all Americans, even John Walker Lindh. She advised before interogation that anything obtained at that time and under those conditions could not be used at a later time in a court of law. Her emails detailing this advice disappeared and Lindh’s conviction used information obtained through early interrogations. She had IT recover the emails. She was forced out of her DOJ job. Her next employer (private) was told to let her go as the government was pursuing her disbarment and criminal prosecution. They let her go. Neither happened but she now knows that voicing matters of conscience will get you punished.

The stories are many. Most end up out of a job through forced retirement or forced resignation but some go all the way up the escalation scale to new identities and the Federal Witness Protection Program.

All of the personal stories in here are important when they stand alone. Together these instances form a critical collection worthy of study as a text in government, history, political science, and indeed any course that touches on philosophy or governance. The individuals covered in the chapters in this work are truly brave and noble individuals. Ann says she collected these stories together to thank the brave voices detailed in DISSENT, someone has to as the future of justice depends on the courage of such individuals, Ann included.

Get the book. Buy a copy for a library, a school, your book club, send it to a Congressperson who is playing it safe.