You are here: Home / Archives for crafting

Hey Crafters, you were way ahead of the curve where legacy is involved, both technologically and visually.
The legacy we build is the legacy we leave.  The love that is poured into an activity with a child or for a loved one can sometimes be felt in the object long after it is crafted. This is why mothers often have a box of treasures on a shelf somewhere that is filled with  lumps of toothpick incised clay shapes and pages of construction paper covered with crayon squiggles.
It goes in both directions. What you craft is a visual and tactile embodiment of caring.  Taking the time to make something beautiful is not only a creative outlet in a life that may or may not have other creative outlets, it is symbolic, and when shared, conveys a personal meaning a purchased gift may not be able to convey.
Crafting often celebrates the processes that have always been infused with love for the people who will enjoy the fruits of those labors. If you make bread, or sweets with daughters, sons, and grandchildren and talk to them about making pasta, or setting the table for Sunday dinner, or gathering eggs with a grandparent or relative when you were small, you crafts little hooks of meaning and experience upon which the child can latch memories of family, and food, and working with relatives, and family friends, for the rest of their lives.
What once might have been absorbed into life matter-of-factly when we were all creatively engaged in living during more agrarian times, can still be experienced though it does take a bit more planning.  The memories we make and the information we share in doing so are well worth the effort.
—
Post 3, the Letter C, Blogging from A to Z  April Challenge

It is Wednesday, so it must be time to review some applications. First, though, I thought I would re-review Martha Stewart Craft Studio and the two Halloween theme packages that can be purchased as add ons to the application and initially included themes. I “purchased” the application for free as a special promotional offering when it first came out in June 2012. I purchased one theme this summer and then when Halloween themes came out, I purchased both of them too. Themes are usually $1.99.
Before I even begin discussing the specific apps, I should let new readers know that I use and iPad with a Logitech Ultrathin Keyboard Cover, which essentially turns my iPad into a small laptop. Because I use it like a laptop, there are times when I want to create a graphic. When I'm on my desktop I tend to use GIMP (opensource) and ArtText (relatively inexpensive), but those software programs are not available for the iPad.
The examples I discuss in the remainder of this post are all images I created with Martha's app. I so wish I had this when I was a Girl Scout Leader, or when I was making Halloween decorations when my daughter was a 'tween or early teen. But these two themes Pumpkin Carving and Haunted House will get lots of use this October creating fall letter headings for general use and cards for my grandbabies, as well as in combination with other themes for the entire fall season, and of course on Goth projects for which I might suddenly find a need.
The shape templates allow you to create square and portrait or landscape rectangular card sized images that can be used for scrapbooking, cards, invitations, photographs, frames, and my favorite use: feature images for my blog. The square images above and below could be used for invitations to a kids party or even an online announcement of a twitter party. The theme packages usually contain a few “neutral” elements that can be combined to make a more more general image such as in the party hat example above. The scalloped edge is from one of the themes that come with the app.
You may also create a new image or project using elements from different theme sets. The edge punch in the crow “cartoon” below that looks like lace is from the Doily Lace Theme as are the floral elements that frame the word bubble. The speech bubble is one of three word or thought balloons from the Everyday Theme that comes with the app. The crow or raven background is from Haunted House. This one is also from Haunted House. I just love the purple background design. But the old paper background is a favorite too. Traditional or artistic, the crafts created can be as unique or conventional as you wish. 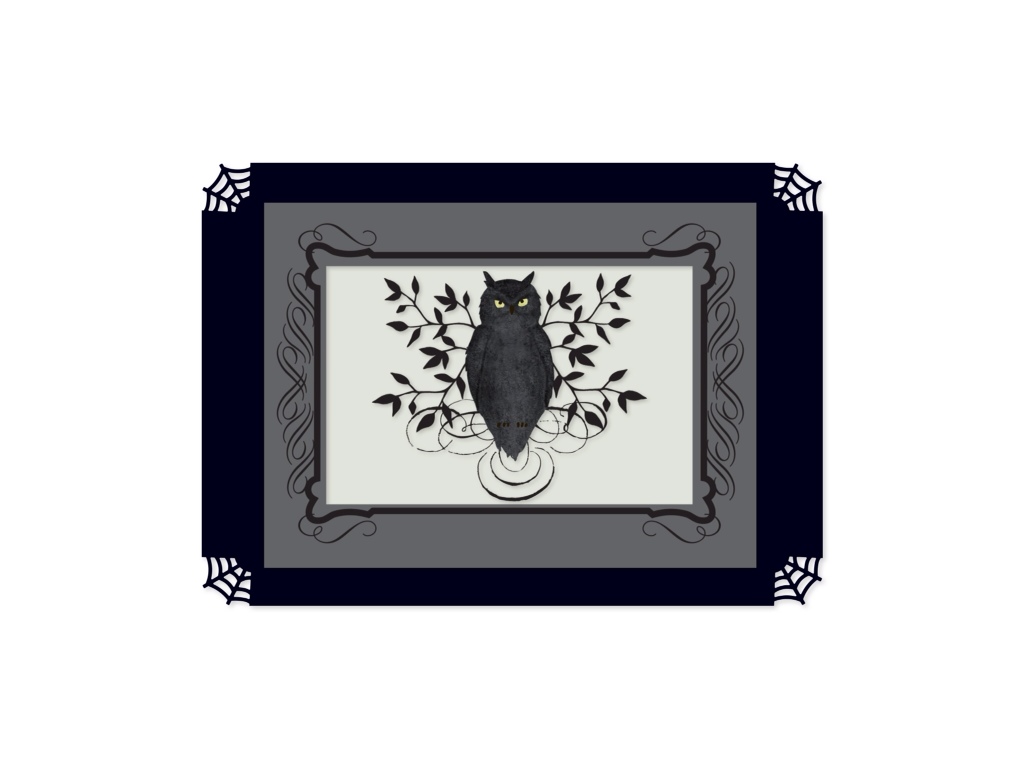 Playful and kid friendly the sweet tooth elements of Halloween are best covered in the Pumpkin Carving theme, which is the theme used to create the following crafts. And of course you can add your own images. All themes come with the equivalent of stamps, stickers, backgrounds, glitter, a pen, punches, and edge scallops which each have options.

Reason Creek’s Application of the Week for the iPad: Martha Stewart’s CraftStudio
The Martha Stewart Craft Studio application is free from the App Store until July 8th thanks to the sponsorship of Snapfish! No I’m not getting paid or reimbursed or anything for reviewing this app. I just stumbled across it and thought, “Hey, lots of folks are going to like this for a variety of reasons!”
While you may certainly use it to make cards, I immediately thought of doing quicky web graphics like the one above, although I am sure you can do better than I did. I just wanted to try out several of the features, such as stamps, stickers, background patterns, text, edge and corner treatments, color, and glitter and handwriting (I decided not to use the later two.)
It allows for undoing, layers, reordering of layers, deletion of elements, altering the color of elements. You can save to pictures, sent, and post.
I wholeheartedly recommend downloading it while it is free. The application allows you to purchase additional palettes or styles if you wish. I have not done that yet. But if I have a need for it, it is nice to know I can quickly make a cute graphic when I’m on the road with just my iPad. The app. will be $4.99 after July 8th.
I’m going to try to design some stickers using this app and print them out for my business promo to hand out at BlogHer using Avery stickers.

I was an errant equivocator today.  Instead of writing I dilly dallied and delayed writing this post and other pieces while I contemplated moving this blog to triplebottomtimes.com (Don’t ask!)  I even created a header for it. But then as I usually do I quit doubting myself and the wonderful name I have here at reason creek.  I just needed to make it look more bloggy and less corporate site-ish. I used a couple images from the National Archives, one from sxc.hu and another from morguefiles.com, a few more images were from a recently rediscovered commercial set of clip art images that Hubby purchased for me a few years ago.  Some of these I had to  crop, add a border or remove a background, and in one case overlap a tiny image to make a long ribbon.  Two were from a free digital scrapbook kit I downloaded when I was searching for backgrounds before I decided to just to it myself.  I did some fill in with textures I had previously made from scratch or by just using my drawing program’s brushes as stamps.
Pretty good for a first attempt at a blog background don’t you think?