There is a reason I use the word history, and not herstory,  as might be predicted by my role as a feminist.  I grew up in a time  and in circumstances where I could not grow to be anything but a self-declared feminist.  However, in many ways I am a traditionalist, though a quite progressive one.  I love change, I advocate for change in processes where I believe it might be of benefit, but I also love to examine the way we pass on information that requires continuity and structure.   I chose to study anthropology and have multiple degrees in that area of study as no other discipline cries out that the “Emperor has no clothes,” “the map is not the territory,” and that “the whole is much greater than the sum of the parts.”  Our processes are difficult to parse as they are, we do not need to add unnecessary obfuscation to them by using words that distract from understanding. Herstory confronts history in so many ways as to obscure the content in her story.
Culture, women’s culture, fascinates me.  Each generation of humankind recreates the connection of individuals to the body of knowledge that is culture.  What makes us each a member of humanity is not what is transcribed in our genes, but that body of learned knowledge that we have accumulated and transmitted through words, through mentorship, and through structured training and education.
This might sound as though it is a process that flows in one direction, from the elders to youth.  But it is not.  No essential process in a living system can be anything but negotiation.  Flexibility, give and take, feedback, exchange, and discussion provide the living stuff of culture to what would be one dimensional edict or dominance hierarchy without it.
At this moment in time all things are in flux, they always are, but more-so now than ever.  The contemporary information system truly is global and flows at nearly instantaneous speeds.  The complexity of such a system boggles my mind.
I am not a systems expert, and I would venture to say there are no living system experts. So take what I say here, about the subsystem that is women’s culture, as so much detritus left behind as the  fracturing of the whole that is cultural information into small bits of that whole thing.  This particular whole cannot, and does not, exist by itself, other than as a conveniently sized artifact for human examination.  Taking anything out of the ecosystem in which it exists, even in an evolutionary thought experiment, destroys the life of that thing. 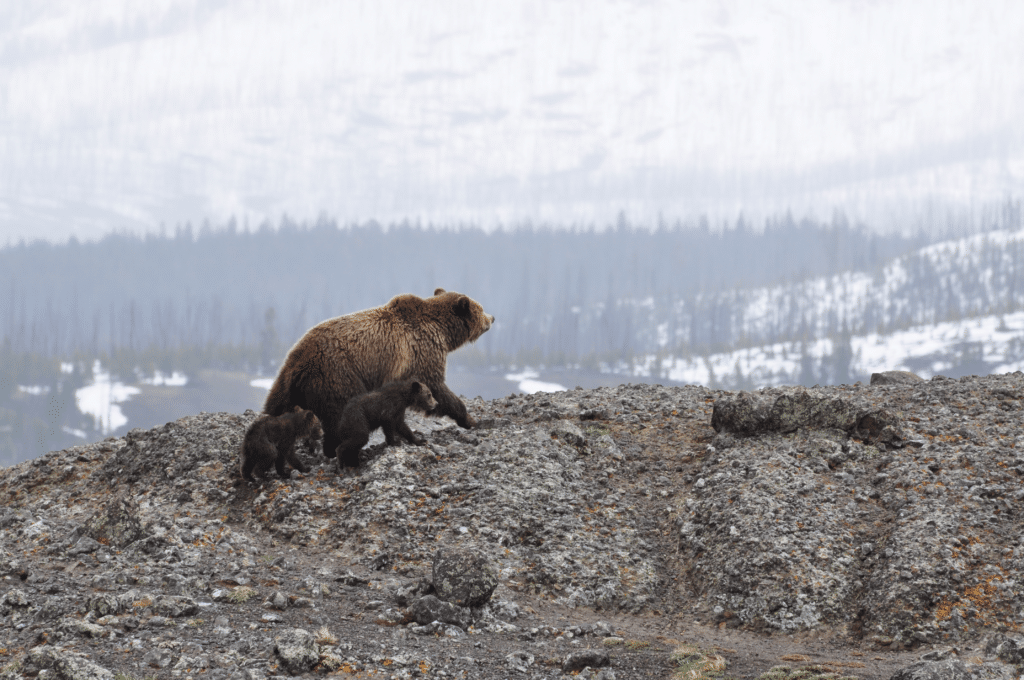 The iconic Mama Grizzly conveys the inherent difference between the female and male lifeways.

Women’s communication processes do exist though they cannot be frozen in time or space to examine.  Processes are not things.  At the most fundamental level of understanding we speak of matter and energy.  Information is more akin to energy than matter.  The flow of information can be disrupted.  Just like energy information flows around the disruption.
Women’s communication systems have been subjected to unnatural limits in historic times.  Every construct is socially produced or fabricated, sometimes intentionally, sometimes unintentionally.  This is nowhere better stated than when my mentor, Myrdene Anderson, spoke of her mentor’s work, G. Evelyn Hutchinson, in Sharing G. Evelyn Hutchinson’s fabricational noise.

evolutionary evolutionary wandering folds into developmental trajectories, surprise fertilizes suspense, means can become ends, medium may be message, and chaos can sort itself into provisional order… and vice versa, Möbius-fashion.
and
Fabricational noise also describes the self-organizational behavior in a far from equilibrium system.

Life is a self-organizing system and thus strives toward a balance.  As our system becomes global and rate of exchange of information turns over faster and faster, a tension is created between information and the slower physical processes it orchestrates. As the saying goes, “something ‘as gotta give.” The emergence of women’s information into this global exchange is predictable.  As I like to say, “information flows toward freedom.”  The physical constraints placed upon women’s behavior by spatial limitations such as gardens, nunneries, and harems in historic culture, and behavioral limitations in economic, political, and religious spheres are now classic examples of the way territorial concerns and property concerns try to create closed systems over which control is exerted.  Persistent open-system characteristics that mock these closed-system delusions include leakage, explosive concentration, and overt escape of information, energy, and stubborn girls.
These behavioral spheres of economics, politics and religion are parts of the escalating pace of global information flow.  The discontinuity between the most static of these constraints and the fluidity of the process related spheres creates a tension, a pull, like the taut and thinning elastic band as it encircles an every expanding bundle of letters.

The London Exchange by Addison in The Spectator, 1711

All of this is why I believe it is critical that women collectively celebrate their ways of knowing by sharing what they know about the lives of their mentors including the stories and lessons passed on to them as they participated in the global system in areas deemed appropriate for women.   It is now time to rewrite the lyric expression of the wonders of commerce expressed by Joseph Addison in the final paragraphs of his May 19, 1711 essay in The Spectator, number 69,  “The Royal Exchange” which I found in a collection of essays from The Spectator published in 1894:

For these reasons, there are not more useful members in a commonwealth than merchants. They knit mankind together in a mutual intercourse of good offices, distribute the gifts of nature, find work for the poor, add wealth to the rich, and magnificence to the great. Our English merchant converts the tin of his own country into gold, and exchanges his wool for rubies. The Mahometans are clothed in our British manu­facture, and the inhabitants of the frozen zone warmed with the fleeces of our sheep.
When I have been upon the ‘Change, I have often fancied one of our old kings standing in person where he is represented iu effigy, and looking down upon the wealthy concourse of people with which that place is every day filled. In this case, how would he be surprised to hear all the languages of Europe spoken in this little spot of his former dominions, and to see so many private men, who in his time would have been the vassals of some powerful baron, negotiating like princes for greater sums of money than were formerly to be met with in the royal treasury ! Trade, without enlarging the British territories, has given us a kind of additional empire. It has multiplied the number of the rich, made our landed estates infinitely more valuable than they were formerly, and added to them au accession of other estates as valuable as the lands themselves.

We need to create a fictive or conceptual, if not literal, Information Exchange akin to the Royal Exchange so that we might lyrically celebrate the wonders of the inclusion of women into the global conversation as Addison did for the inclusion of colonies into imperial commerce.
Our conceptualization of these processes is still skewed, biased, and woefully simplistic, and it contains glaring judgments that are not even obvious to us at this time. But that is where we are.
Processes within and between ecosystems are fluctuating wildly.  Fundamentalist fringe groups attempt to reclaim control over women, a small group of governments attempt to maintain control over monetary exchange, pharmaceutical corporations attempt to exert control over life and death, agrochemical corporations attempt to maintain control over food supplies.  Petrochemical companies attempt to force continued reliance on fossil fuel caches they control.
Unsustainable boundaries are fracturing as I write this.  The limiting constraints have reached the point where they snap.  For the most part women are no longer sequestered behind walls and veils.  Economies still are.  As climate shifts there are viral escapees colonizing new niches where no agro- or pharma- remedies even pretend to have  control.
We can watch as everything disintegrates around us, white-knuckles clasping imaginary controls over processes we do not understand, or we can adopt practices that leaked out of, or escaped from the supposedly closed systems over the years and thrived.
Where have women thrived, what inroads have we walked?  That is what I hope to help others share so that we can learn from our collective wisdom and mitigate system collapse into system reorganization.