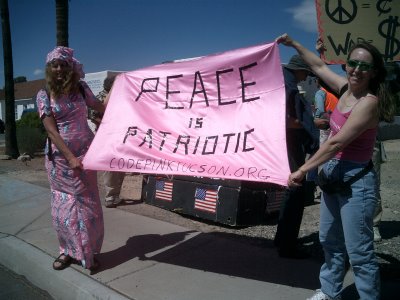 I am finishing up something started the day of the march — yesterday. I am not in top form today as I’m on my third day of a fast. I’m a bit tired and a bit grumpy… but this is a juice fast so I’m not experiencing real hunger, not the kind of hunger that so many in our war torn world live with and die from every day. It was not difficult to march yesterday while fasting as, given my generous figure, I have lots of reserves upon which I can draw.

The Tucson, Arizona observance of the 3rd Anniversary of the Iraq War began 10 a.m. yesterday (Saturday, March 18th, 2006) as the crowd of approximately 200 folks 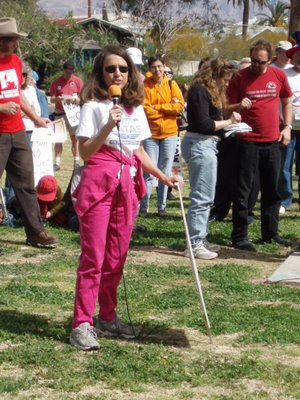 gathered for the Peace Rally at Catalina Park at which there was music by individual artists and the Raging Grannies as well as personal statements and recollections, statements from candidates for the Arizona Senate as well as contenders for Kolbe’s soon to be vacated seat, as well as spokespersons for local peace and justice groups. For me the most moving portion of the rally was when Salette Latas (see pic at left), herself an Air Force veteran, described her feelings at sending her father off to Vietnam, her husband (retired from Air Force) to the first Gulf War, her son to Iraq. She also spoke about being in Walter Reed last November on Veterans Day with her son and the other wounded soldiers while Senators and Congressional Reps were no where in sight. They were all out expressing patriotic support for war, while the soldiers who were undisputedable patriots were left to themselves in Walter Reed. That was the day her husband Jeff announced his candidacy for the AZ District 8 Congressional Seat in order to continue the family tradition of serving in a way that would not support the corporations and elite few individuals in power who benefit from war without paying any of the true costs in life and limb. She encouraged everyone to keep protesting and working to build peace.

The march itself was uneventful… the usual. With an amalgamation of people who want peace. Older people who have been in the peace movement most of their adult lives. First time marchers who have reached a critical point where they can no longer keep silent about unjust war and occupation of other countries. A few students. Some of the youthful anarchists who 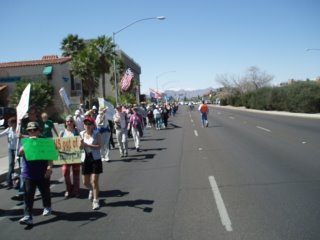 gravitate toward wearing black and using obscenities for reasons that are not obvious. There were Army vets (and vets from other branches too.) Political sentiments were all over the chart. There were people who seemed to not be all that comfortable protesting but felt they had to do something. There were folks holding U.S. flags “upside down.” This offended some people. Others understood that this is the sign used for “distress” but were concerned that others might not know this. 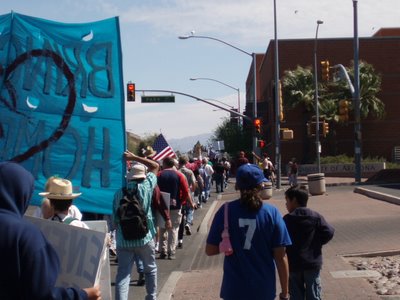 The route to the Recruiting Center on Speedway was flanked by motorcycle cops but as always with a non-permitted march (permits are not an option for marches in Tucson) it is not clear that all of a sudden the officers could decide the marchers are doing something wrong. But they predominantly focused on the job of keeping cars and pedestrians separated.

The “counter-protesters” had been at the recruiting center for at least an hour before the rally had even started. Marchers vastly outnumbered the pro-war group who looked to be the same pro-war folks that demonstrate across from the weekly military recruiting protest on Wednesday mornings. The balance was at 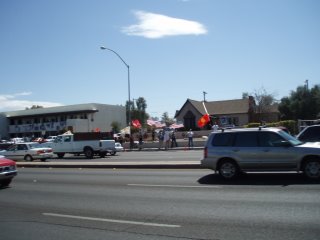 least five to one in favor of the pro-peace group by the time the march arrived at its destination. Numbers built throughout the rally and march until several blocks were filled with pro-peace folks several deep in most spots. This compared to the scattering of pro-war folks with their huge flags standing two arm lengths apart apparently to try to increase the seeming number of their group that numbered somewhere around a couple dozen. The drivers passing who chose to signal pro-peace support were in the majority making up close to 90% of the passing cars who signaled an opinion.

The pro-war group seems to truly hate the expression of viewpoints different than their own. As is often the case on Wednesdays when the groups line the opposite sides of the street, after the police left, the pro-war group had several individuals cross the street and surround and threaten the last few pro-peace demonstrators on the north side of the street. Individuals who work in the businesses on the north side of Speedway report that the pro-war people routinely cross the street and harass and attempt to intimidate the peace folks. Calls placed to the police by these workers to the police report that the police do not reign in these folks who threaten other law abiding citizens and only say that the pro-war folks say the same thing. Apparently the police are quite comfortable disregarding calls reporting harassment and intimidation of lawful peace demonstrators. This was undoubtedly the most disturbing aspect of the day. TPD officers have apparently aligned themselves, taking sides with the “pro-recruiter” folks in what certainly seems to some to be a sign of the willingness of at least some local police to participate in a police state.