The most disturbing news item for me this week concerned who could attend the State of the Union Address and who could not attend.

Cindy Sheehan was forcibly removed from the Gallery at the Capital and arrested. The authorities now say, “oops.” Cindy is not going to let this afront to her civil liberties quietly fade away. While I don’t agree with everything Ms. Sheehan says or does, one does have to remember that she has only come under the constant scrutiny of an unrelenting media in the last six months and she had not prepared for such celebrity through years of education and training as are most talking heads. She does fairly well for a person who has become iconic for all the major sides in the fever pitched battle for America’s soul.

The little guy whose son has died fighting for America is abused legally and physically. The wealthy beyond imagining individual who has multiple direct connections to the leader of our country’s most avowed enemy is welcomed with honor into those same halls. 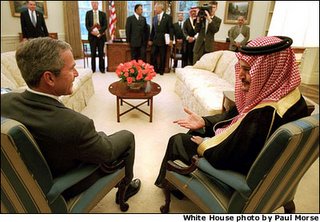 Prince Turki al-Faisal (with Bush in White House photo), a central member of the Saudi royal family and the kingdom’s current ambassador to the US personally managed Riyadh’s relations with Osama bin Laden and Mullah Muhammad Omar of the Taliban and was named in the $1 trillion lawsuit filed by hundreds of 9/11 victims’ families, who accused him of funding bin Laden’s network, and was head of Saudi intelligence until 10 days before the 9/11 attacks.

The second most disturbing news is that Rosemary Woods ghost apparently has run amok in Cheney’s email archive. Fitzgerald, special prosecutor in Scooter Libby’s investigation/prosecution has suggested that not all of Cheney’s emails from 2003 may have been archived due to a glitch.

Oh, news that is just plain chilling is that the first case relating to termination of pregnancy that Alito will hear nears the bench.

These are only some of the the underreported news items of the week, of course. These are just the significant stories behind the non-news blasted in continuous loops from the corporate media.

buildpeace.blogspot.com
Previous Post: « Who are the best soldiers to send to D.C. to take back our country?
Next Post: Jennifer Harbury on Torture »