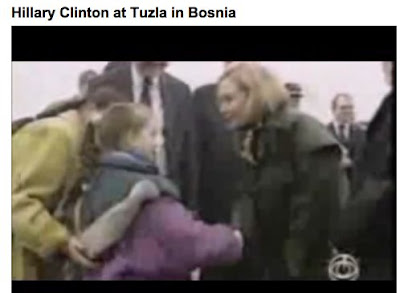 Meet the Press this morning framed an equality where there is none. (Read they lied through omission.) Why didn’t Russert show the video of the arrival Senator Hillary Clinton in Tusla juxtaposed with her rather blatant lie about arriving under sniper fire in order to beef up her supposed foreign affairs experience. He shows the Reverend Wright video one more time but fails to show the video of she and Chelsey strolling across the tarmac, greeting leaders, and hugging little girls. Clinton better not complain ever again about how unfairly she is treated by the media. Why the hell doesn’t the press put her “sniper” talk over a split screen with the Kosovo video and show it nonstop for two weeks and then take a poll? This is one of the most blatant and thus excellent examples of how the Democratic Machine/DLC operates. Note: There is nothing about the DLC that reflects any sentiment of the vast majority of people who make up the Democratic voters. “Party” candidates and “Peoples” candidates within the U.S. political parties are very different critters. Pre-National Convention party candidates such as Hillary Clinton act as though they have an entitlement to be on the ticket. This scares me. What scares me even more this corporation/party lock-step is that the Clintons (both of ’em) seem to have no qualms about altering facts and presenting them as truth.

And even more chilling is that this means that they have come to believe their own lies or that they believe they are above “mere” facts. This is eerily reminiscent of the Ranters of the 1600s who like all good Calvinist-influenced sects believed success in life (business and politics) illustrated favor by God, and as favored they were good, pure and predestined to be saved and thus not bound by Puritanic rules. It is convoluted, but no more circuitous than Hillary’s association with the conservative cult-like group on Capitol Hill. Acting from a position that you are doing X, Y, or Z because you are favored by God is a stance that has no place in American Politics. Don’t ask Obama why he attends a Church of Christ, ask Clinton why she is a member of “The Family?” Don’t know who the The Family or The Fellowship is? Read on and be very, very frightened. Perhaps today, this Easter, this most sacred of days in the Christian faith, real Christians who follow the teachings of Jesus should finally out the closet fascists hiding under the cloak of Jesus.

Barbara Ehrenreich writes on Thursday, March 20, 2008 in the The Nation that Hillary Clinton has far more unsavory religious connections than Obama could ever dream of having.

“You can find all about it in a widely under-read article in the September 2007 issue of Mother Jones, in which Kathryn Joyce and Jeff Sharlet reported that “through all of her years in Washington, Clinton has been an active participant in conservative Bible study and prayer circles that are part of a secretive Capitol Hill group known as “The “Fellowship,” also known as The Family. But it won’t be a secret much longer. Jeff Sharlet’s shocking exposé The Family: The Secret Fundamentalism at the Heart of American Power will be published in May.”