What a wonderful day of comraderie and peace building! I awoke at the CODEPINK house this a.m. to the sounds of people arriving at the house from all over the country. Luggage bumping up stairs, coffee brewing, folks coming in to drop off vegan cookies. People chatting about favorite actions and strategies for uniting people. It was energizing. While my thoughts flitted around remembering names, faces, hooking up my digital recorder so I could interview folks with good stories, I kept having thoughts running through my head about the people about to be set upon hurricane Rita and the soldiers and Iraqis immersed in the havoc of equally out of control forces.

It is always a precarious line between using creative energy to focus awareness on issues and going over the top. But the Tidal Pool Paddle Boat action once again proved the amazing synchronicity of CODEPINK think. 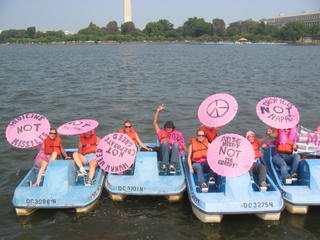 The action involved at least 22 women dressed in pink in the paddle boats you can rent at the tidal basin. We paddled across to the area in front of the Lincoln memorial with pink bamboo and paper umbrellas with messages such as “education not occupation” written on them and when we finally all got in synch 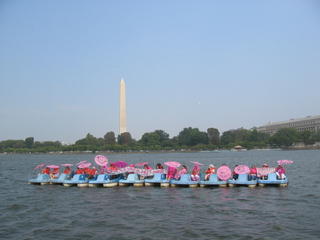 and were lined up with banners stretching between boats, and umbrellas all visible from the Lincoln Memorial it felt right. Tourists loved the action. Several fathers were explaining to their children what we were doing and how dissent is a part of the democratic process. It was really nice to present a non-threating image to the kids. A CBS news team showed up and did a lot of taping when we were singing the new lyrics sung to the tune of American Pie that one “car” of people came up with on the way to the action.

Then it was back to the Pink House to prepare for a meet and greet and organize that was to occur later in the day. But before that we had a very large vigil in front of Walter Reed where injured soldiers are brought. The adversarial group across the street was rude, attacked us verbally hoping for confrontation, and were very noisy and disrespectful of the vets they supposedly support. As usual CODEPINK was about real issues of importance to the folks inside walter Reed and the people across the street didn’t really have a message other than just attacking CODEPINK. We just ignored them.

Then after the meet and greet for all the pinkers who have come from Fort Worth, Portland, Chicago, North Carolina, San Diego LA San Francisco, New York.

A long day but fruitful. Truly inspiring to see all these women building rather than tearing down.

Previous Post: « Here in D.C. and ready for a weekend of action!
Next Post: Hundreds of Thousands March »