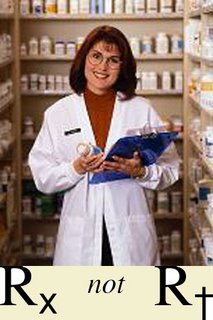 I attended the protest outside of the Fry’s Grocery at Grant and Alvernon in Tucson on Thursday… The action was organized by Feminist Student Network and Students for Choice and co-sponsored by several local and national groups. The protest centered on the apparent refusal of a pharmacy to fill the prescription of a rape victim for emergency contraception. EC — the term used by most health professionals for emergency contraception such as Plan B — not the “the morning after pill” or “abortion” pill.
We need Rx not Rt.

What isn’t clear to me is whether this abuse/failure of a woman’s need for health care came about because of ignorance, personal moral conviction, or corporate policy. In any case, a problem has been identified and needs to be corrected. This is a pure and simple case about access to contraception. You can spin it however you want, but refusal to fill a contraceptive prescription is tantamount to forced pregnancy — and that is the worst form of slavery.

The women and men at the protest were from varied walks and stages of life. There were a significant number of men of all ages at the protest, at least ten percent of group making the collective statement for choice were men. The number of protestors varied from 75 to 35 people at any given moment with people coming and going through the three hour protest that took place between 11 a.m. and 2 p.m. At least 100 different individuals probably participated.

I spoke with a young mother who had just been driving by and saw the protest and joined it. She told me she had never been involved in any protest and was apolitical and was not registered to vote. But she feels strongly that it is every woman’s right to have access to health care so she can freely make choices that shape her life. Another woman at the other side of the reproductive spectrum said she had not been active in such events until she began to look at the corporate control of huge components of people’s lives because corporations are given all the rights of people. This leads to corporate policy of businesses such as Fry’s having undue control over real people’s ability to have control over their own lives.

Another very significant component of the protest was the very positive feedback from passersby. As a veteran of various types of protest, I can honestly say that a dramatically larger percentage of all traffic by the protest signalled positive support of the demonstrators. It seemed that almost half of the passersbys gave positive supportive honks, thumbs up, smiles and waves. It seemed that way, but undoubtedly the percentage was smaller, but not hugely so. The negative feedback was hardly visible.

This signals a very widespread support of freedom of choice that cuts across class, race, and economy. The support for a woman’s right to choose is at least five times as popular as the anti-war sentiment that is growing appreciably day by day if measured by people driving in Tucson. The DNC would be well advised to acknowledge these popular sentiments and create a strong platform that reflects the central values of the largest sections of the population: autonomy, personal authority over one’s own life that translates into a pro-choice, pro-woman, pro-peace platform.

Previous Post: « The 50 Arizona Servicemen and Women Who Have Lost Their Lives in Iraq
Next Post: DNC in AZ »