Spent the day sorting through stuff in order to have a garage sale within a few days, and helping my husband organize the content of some boxes he brought back from being in storage in the state where he grew up.  He passed through there when he came back from sabbatical on the East Coast. 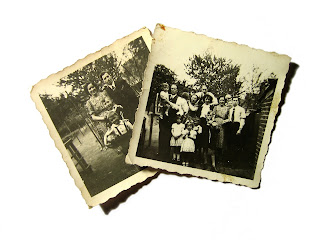 My family is weird, but his family background is truly unusual.  The snapshots we found today included baby and childhood photographs that I hadn’t ever seen, and that he thought no longer existed. I was so glad that my daughter and her step-sister will have a more complete history of his family.  Portrait photos to go with names, and houses and cars give a context that really fills out understanding of a time and place.   There were semi risque pics of his mom taken by his father.  They were very free-thinking people when it came to sexuality but they were arch conservatives when it came to politics and social issues.   His dad was an extremely fine gunsmith.   There were letters and documents in the boxes too. National Rifle Association memberships and awards, shooting club patches, and hints at Hubby’s Dad’s first marriage provided links that tied the photos and documents together.  There are more dates to help us fill out a timeline that has always been fuzzy.

I went online and re-upped for ancestry.com and began searching.  My husband always thought that he was a bastard… but that isn’t really true.  His parents did marry, a bit late perhaps by societal standards, but I found out when and where they married.  I haven’t found out much about his dad’s first marriage.  If there had been children I think I would have found the records from birth announcements in the newspapers.

When I was growing up my family always recited lineages as though they were litanies.  It is odd to now be able to build those same sort of lineages for my husband’s family even though both parents had been gone for ages by the time we married.

Personal history, family history, and the flavor of community are so difficult to capture after the fact.  I’m glad we can write it down for the kids now while we still have control of most of our faculties.