People from all over the country are heading to Washington,
D.C. this week.  A bit further on I
discuss meeting with three of them heading across country to Occupy DC.  October 6th marks the 10th
anniversary of the invasion and occupation of Afghanistan.  Ten years ago we were mourning the
attacks on New York City, the District of Columbia, and one attack that was
thwarted and became a crash site in Pennsylvania.  We had the world on our side, our country was more united
than we had been in decades, and our finances were in good shape.

10 years later the American people seem to be awakening to
an understanding that they have been lied to, manipulated and bankrupted in
order to benefit the wealthy corporate and military interests that used an
attack on U.S. soil to corrupt the democratic processes that regulate
capitalist maximization of profit at the expense of human needs.
The unemployed, the outraged, the peaceful have put out and
are responding to a call to gather together.   The Wall Street Occupation is getting the attention
today, the D.C. occupation will probably get the attention at the end of the
week.  The fact that I haven’t
heard discussed is that this is happening during the month after the 10 year
anniversary of our country was attacked and  the 10 year anniversary
October 2011 is
the 10th anniversary of the invasion of Afghanistan and the beginning of the
2012 federal austerity budget. It is time to light the spark that sets off a
true democratic, nonviolent transition to a world in which people are freed to
create just and sustainable solutions.
During the evening of September 29th  I had the opportunity to talk to Xan,
Peter, and Kevyn  as they came
through Tucson on a caravan across the southern United States that was stopping
in as many places along the way as people want them to talk about the issues or
to join in a vigil or protest, or join with the caravan and go to D.C. to join
the Human Need Not Corporate Greed occupation  force there. 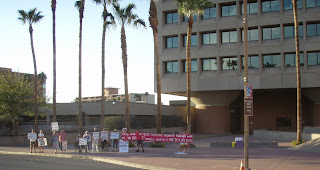 The three original caravan members, others may have joined along the
way by now, are associated with peace groups, Xan and Kevyn identify with
CodePINK, and Peter is a member of Veterans for Peace.
Their stay in Tucson included protest with the local peace and justice
community at weekly gathering in front of the Federal Building in downtown
Tucson at rush hour, a candlelight vigil for DRONE victims in front of the
gates of Davis Monthan Air Force Base at sunset,  connection with another weekly vigil  for those migrants who die in the
surrounding desert nearly every week of the year in the northern reaches of the
Sonoran Desert.  Then with the
Theater’s permission the lead Caravan Truck parked in front of the main theater
doors with the with the side with
the beautiful mural painted by Phoebe Ackley so that viewers of a
privately sponsored viewing of  The Future of Food
organized by the Tucson GMO Free
Group  could see that
individuals from diverse groups have the same concerns and can spread a
message, have impact, and talk to
caravan members about the overlapping goals and agendas of peace and
safe food groups. 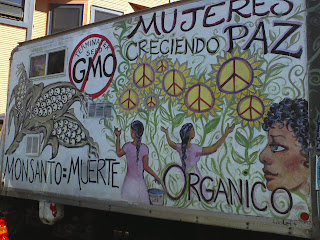 The concept of overlapping concerns and goals is a growing theme in
U.S. civic action.  Talking heads,
such as Dylan
Ratigan on MSNBC today noted the amorphous nature of the reasons for the
Occupy Wall Street actions in NYC that are spreading to other major cities
across the United States.  The October 2011 web site that is the
overarching informational site about the occupation of Freedom Plaza in D.C.
has a list of 15 Core Issues
of the Human Needs Not Corporate Greed actions
in D.C.
The events commencing October 6 in D.C. are focused on redirecting war,
military and occupation funds back to support of human and environmental
needs.  The pledge on the October2011.org states,
“I pledge that if any U.S. troops, contractors,
or mercenaries remain in Afghanistan on Thursday, October 6, 2011, as that
occupation goes into its 11th year, I will commit to being in Freedom Plaza in
Washington, D.C., with others on that day or the days immediately following,
for as long as I can, with the intention of making it our Tahrir Square, Cairo,
our Madison, Wisconsin, where we will NONVIOLENTLY resist the corporate machine
by occupying Freedom Plaza to demand that America’s resources be invested in
human needs and environmental protection instead of war and exploitation. We
can do this together. We will be the beginning.”
People’s motivations and wellbeing, as well as the ideal of democracy
are complex constructs and cannot be condensed into the well-packaged marketing
sound bytes easily broadcast by our media that now functions as much from press
releases as from investigative journalism.  If the media, even those very few media outlets that are
covering the Human Needs movement, does not understand what certainly seems
like parts of a mass movement reacting to corporate take over of government
functions around the world, well perhaps they will have to revert to old fashioned
journalistic practice.
Today through Thursday of this week the CodePINK Caravan will travel through
Shreveport, Louisiana – Jackson, Mississippi – Birmingham, Alabama, – Atlanta,
Georgia – Charlotte and Henderson, North Carolina on the way to their arrival
in Freedom Plaza in D.C.  at 9 a.m.
Thursday.  “ Thursday,” as the
participants note, “is only the beginning.” 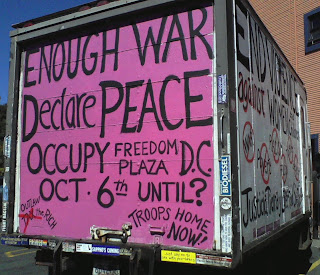 Xan has kept a blog of her activities at CODEPINK Journals since
2003.  She has made many cross
country trips from her home in Berkeley to Washington, D.C. and was
instrumental in getting the first on-going, long-term CODEPINK presence from
all over the U.S. established in D.C. in 2006 and again in 2007 which lead to
over two years of constant action in the Halls of Congress by women who came
from every part of the U.S. to stay for a week or a month and focus on actions
pertinent to them and the areas of the country from which they came at The Pink
House, a cooperatively run house near Capitol Hill.
A core group of activists and groups have promoted various views of and solutions to the
misuse of government. and the peoples wishes and funds,  over the last 10
years.  Without them the current,
extremely diverse 99 Percent
might not be able to move in synch in what now seems to be a an organic trajectory
rather than a single minded group.  Just like the Caravan built on already occurring events in the local community, what is building in the U.S. builds on years, and indeed years of awareness of the growth of greed. This
is the stuff of which revolutions are made.  I think the people of the United States had their revolution
and now they want it back.  Democracy
is powerful and it is far more than a memory to the American People.
—-
I can provide contact information to
interested independent journalist bloggers who wish to request an interview
with one or more of the caravan participants.