Make some calls!  NOW!   This is from the Facebook Wall:

OccupyTucson needs your help! TPD is utilizing a strategy of
financial attrition to kill the movement by issuing criminal citations
to occupiers in the who stay in the park past 10:30pm. This citation
carries a potential sentence of up to a $1000 fine, up to 6 months in
jail, and up to 3 years probation. They are bleeding this movement
financially instead of using pepper spray and batons. We need you all to
take action now! Below is the link with the phone numbers and email
addresses of each of the members of Tucson city council. Call them and
demand that TPD stop it’s war of financial attrition against
OccupyTucson.

Also:  There is a march to City Council starting at 4:30 from Armory Park today if I read the post correctly. 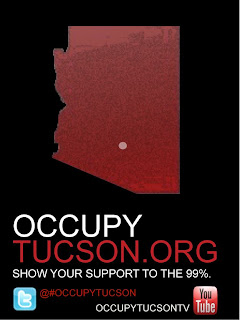 I have linked the image above to the Occupy Tucson site, even though I have been unable to get it to load.