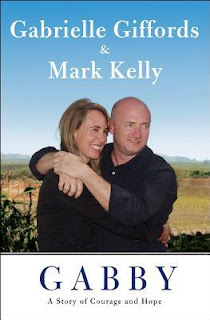 Waiting for the talk by Cpt. Mark Kelly to start on the U of A campus.

The talk is sponsored by the Tucson Festival of Books. My husband is p.o.ed that the Arizona Daily Star had the first 12 rows reserved for “VIPs.”

The event was to start at 7:30 p.m. with everyone in their seats by 7:15 but there was security theater getting inane everyone was outside waiting in line in the cold as the very slow progression to get in finally started.

Someone is at the podium speaking about the Festival’s good works.

New mayor and some council members in attendance.

Message from Gabby. Month ago.

Kid in a space suit.

Physical, occupational, an hour each and a couple hours in speech therapy.

Why the book? Telling the story to remember it. “Seemed like the right thing to do.” They aged to tell all personally. Jeff Laslo collaborated with them. Couple hours a day driving and talking to him.

Grew up in neighborhood where the Sopranos was set as the son of two cops.

Still haven’t taken honeymoon. “Need to work that in.”

Caregiver of crew or Gabby. Prior skills in complex decision, planning, organizing. Advocate.marriage – that is what he signed up for.

She is positive, determined… Does not want to miss therapy, even for President Obama.

Gave her cane she walked to garage and threw it out.

Healthcare: we’ve made poor choices.
Limited amount of therapy. 10 yrs. With one month of therapy. A few months in a row would have fixed everything.

2nd opinion group think equal stupid. Ask a junior person’s opinion. None of us is as dumb as all of us. In group Conf room at mission control. Told that to surgeons in care mtgs. Demanded a second opinion.

Gabby forced him to get 7 second opinions when he had prostate cancer.   No way brain surgery with out.

Google effect. Gabby’s mushrooming “presence.”  Bothered him at first.  He got over that.

On Bono, “Gabby is in love with both of us.”
he had met gabby before. Same picture on her desk.

Patience. Learned to be patient.

She is a compassionate person.

Learned a lot from writing.

At Mesa verde school earlier today.  Yearbook from school taken into space. the most impact from all of this year, Ron Barber, Gabriel’s death?  No – 9 yr old girl. Tragic. Christina Taylor Green.

Compartmentalization. Helped. Training for care giving and space flight. It helped. Focus you learn to – to fly.  For moments in time to be able to forget about every thing else.

GG coming back to Tucson? Decision still to bemade. Eventually spend all of time in Tucson.

Continuing service is probably a motivator.

She wants to continue – time will tell.

Her office is still functioning. Everything but voting. Shooting on sat. Office open Monday.

Marches out the door every morning.

Will decide on anniversary events.

Next for him?  “My job is to make sure she can run for office.”

Sarah Palin… Not yet, I ‘m waiting.

Book signing line outside (again) in the COLD. We didn’t stay for the signing.