First we had to work on her warm weather attire.  These woolen necessities were purchased for her in the L.L. Bean flagship store in Maine during Hubby’s Fall 2011 Road Trip. 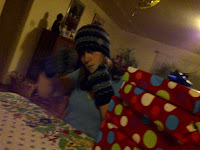 And to get her acquainted with the basics of living far away from parents in her own home.  Here she reads her new copy of The Joy of Cooking. 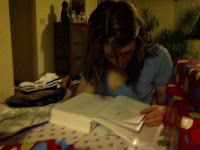 Day 1
Then we finally hit the road on January 17th and drove East on Interstate Highway 10.  We knew we wouldn’t get very far, but heck, we knew we would get in a few hours of driving.  And we did.
We took the New Mexico Highway 26 shortcut between Deming, NM and Hatch, NM. I love visiting Las Cruces and Mesilla Park, but making good time was more important than visiting some dear friends in Las Cruces and visiting one of my favorite independent book stores in the world in the Old Mesilla Square.   This shortcut takes off at least an hour from the trip.

I would post pics of the motel we stayed at in Truth or Consequences, NM, but we didn’t take any.  The folks were really nice, but the Motel 6 was sort of grody.  We were glad we brought a big ol’ can of disinfectant spray along.

Day 2
We got breakfast before hitting the road.  Zilla likes her OJ and was hell bent on drinking lots of it before this winter’s poor, bitter crop hits the shelves.
And it is back on the road again.
We drove to from Albuquerque, NM Liberal, KS via Interstate 40 and U.S. Highway 54.  I ‘ve taken lots of routes trying to get from New Mexico to various places in the northern Midwest:  I’ve taken the Raton Pass and gone up I-25 to I-70 and I-25 to all sorts of CO State Highways through Dodge City and other small towns and on up to I-70,  I’ve taken I-40 to I-35 and I-40 to I-44, and now I’ve take US 54 from just outside Tucumcari, NM to Wichita, KS.
Taking the Raton Pass was most scenic and I met the most unusual people on that trip.  And this trip Jan 2012 trip where I took the U.S. 54 “shortcut” was not fun.  Too many big rigs on this small two lane highway which we drove at night, so I don’t have pics.  But the next day going was slow again.  (see Day 3.) And getting onto I-35 is a feat in Wichita.  For presbyopic eyes like mine and I35 and a135 can look alot alike.  I wouldn’t take this route again.  Interstate 40 is boring.  The I-35 Toll Road isn’t bad at all.
Day 3
We had breakfast at a local place that had the weirdest omelet in the world.  What did I expect?  It was called The Pancake House.  And I would have looked elsewhere until I found something had I noticed the Haliburton advertising on the high tech ad board in the place.  The overheard conversation of the day, from the booth behind us, came from this breakfast place, “I did really good at math until 7th grade or so…”
Back on U.S. Highway Route 54 after breakfast we found the driving less dangerous but slower than we would have liked.  In this pic below we are waiting for a lead car to drive us through a stretch of road that did not seem to have any construction or obstacle between the two flagman staffed stop points.
The only vehicles I saw pulled off the road between the two points were the ones in the following pics — and the VW is Zilla’s.  Doesn’t look like anything was going on to me but highway crews giving themselves something to do.
I only have this one pic from further on in the drive that day from Northern Kansas as it was sort of ho hum driving for me and I was thinking about other stuff. 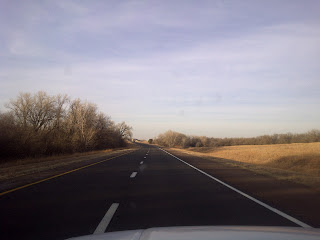 Because I took the northern  non-toll road route and Zilla took I-35 she got to the stopping point and found the hotel for the night in Clive, IA.
Day 4
We ended up spend the entire next day in the hotel in beautiful downtown (actually suburban) Clive, IA – just outside of Des Moines – because a small winter storm decided to hit early on Day 4 in Northern Iowa between Des Moines and Minneapolis.  There was not that much snow accumulation but there was wind, blowing snow and low visibility according to folks working in the area who front desk staff at the Best Western were nice enough to call for me.  It was a nice room that looked just like this. I recommend it, although I thought the price was a bit high for a Best Western but then I didn’t book it.  I’d have gotten a better rate.
Zilla had never driven in snow before and we decided to just stay in and work on her Graduate School applications.  She wrote.  I got a severe case of push button finger (just like George Jetson) from repeatedly going through automated menus of inordinate complexity and length to order GRE scores be sent to her schools.  I kept getting booted from the automated phone system after almost completing all the entries for the list of schools.  Frustrating.
Day 5
Of a 3 Day Trip
Yippee!  We are finally headed toward Minneapolis.  You could tell we were nearing our destination because the scenery finally looked like the black and white winter imagery we were expecting. 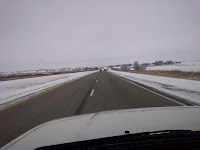 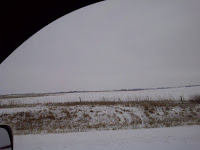 We eventually arrived in Ritchfield which I guess is in Southern Minneapolis and unpacked the vehicles.
I had to have a Juicy Lucy from the 5 8 Club so…. we trotted our buns over to 5800 Cedar Avenue South Minneapolis, MN 55417-2648to get a burger on a bun.   I am not a beef lover.  I occasionally will opt for a burger.  This was first on my list of things to do in Minneapolis during this visit, even coming in above a visit to the Walker Art Center.  The firs
t bite was exquisite.  The onion rings were fine but nothing to write home about, they were hot and crispy but were pre-packaged I think.  The burger was all home made.  Two patties with American cheese in between.  Yum.  And a cold brewski.  Well worth doing if you are in Minneapolis.  There are a couple other locations too. 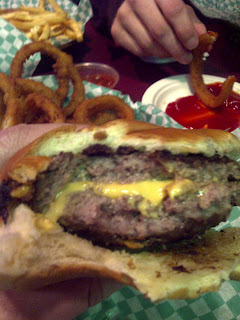 Char Char had to wait in the car while the peoples ate burgers.  Poor baby.  Even when wearing her winter jacket, she s not impressed with the cold and snow.
But the trip was worth it.  The young couple, Zilla and Tree Boy, with Mr. Hendrix and Char-Char in their new home.
I will write about the rest of my trip – the solo part, after Minneapolis, another time.  This was just the first leg of my journey. 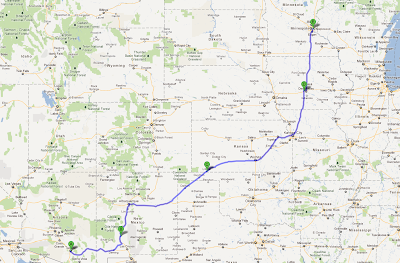 Previous Post: « The First Day of What I've Worked to Achieve
Next Post: You Cannot Be Upset If You Roll With The Punches »