Of course equally public photos of Clinton did not prove anything in and of themselves either, just as this one of a Condi and George’s hug and kiss proves nothing either 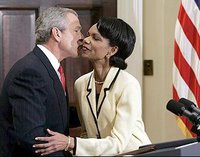 Now I haven’t said it is true, but the possibility that and the increasing buzz about Georgey Bush and Condi Rice having an affair is just so reasonable that it is difficult to ignore. Is it possoible that this may have been what Hillary was talking about when she made that infamous comment on January 16th of this year comparing administration tactics to that of a plantation?

It would be delicious to think so, but unfortunately the likelihood of that possibility is negligible to none. She was not talking about anyone in the White House. What she said was, “When you look at the way the House of Representatives has been run, it has been run like a plantation, and you know what I’m talking about.” Senator Clinton said this before an audience at the Canaan Baptist Church of Christ gathered together for an MLK Day observance earlier this year. Seems extremely unlikely that she was talking about any George Bush, Laura Bush, Condoleeza Rice love triangle.
Sorry to remind folks of this, but as juicey a morsel as this would be… it just isn’t going to hold up. The best support for this illicit liaison still rests in the Freudian slip Rice made when she reportedly said, “my husb… er …. I mean the President” at a Washington dinner party.

This story is not going away!

Previous Post: « Yowza — Laura Bush MOVES OUT and MTV goes beyond pablum.
Next Post: Paving the way for voting fraud and a police state. »