I’m probably far enough under the radar screen of corporate media that I won’t suffer a direct attack for this post that is supportive of Latas. We’ll see — one of his opponents has money and lots of it (including lots of out-of-state money….. grumble gripe bitch moan) and money talks. But so does integrity.

I have backed Jeff Latas for Congress ever since I met Salette, his wife, about a year ago. I will write more about why Jeff is a kick ass candidate, but right now I want to talk about the other half of the Latas deal — Salette Latas. I was amazed by this tough, sensitive, informed woman who had just seen her son off to fight in Iraq. She knows the need for the military — she and Jeff were a ROTC romance and both served their country. She also knows the need for peace and a mother’s love for her children. She knows the pain of watching loved ones go off to fight. As a child she saw her dad off to Vietnam, as a young mother she saw her husband off to Gulf War I, as a mother she watched her son go off to Iraq. Knowing war makes you want peace. (And that is something those chicken hawks in D.C. have shown all too clearly. Only those who have not fought and have never and will never see loved ones off to battle are the ones who scream for blood and bringing it on.)

I try not to be a sexist as I believe that would defeat the purpose of my feminist stances on many issues. But I have to admit that when I evaluate someone I evaluate his or her spouse, partner, or significant other. Salette is a powerful, articulate speaker. Last night at the Boondocks the Latas campaign recognized the volunteers working on his campaign. (I attended with one of those volunteers who came to Jeff’s campaign after I talked about meeting “a dynamic woman who has a husband running for congress.” ) I was once again remined of the whole package that the Latas campain offers. Salette spoke of the 18,000 families that, like the Latas family, have gotten the dreaded call saying their loved one is being medically evacuated from Iraq. She spoke with such clarity that for a moment I was a little girl again watching the Marine Corps car pull into my family’s driveway not once but twice during 1968 when my brother was wounded in Hue and returned to action only to catch a bunch of shrapnel in the gut in Khe Sahn. Last night as she spoke I felt tears well up in my eyes and the beginning of the muscular contraction that wants to become a scream of injustice and grief for all the beloved children who have been maimed physically and psychologically by war. The Latas family knows Walter Reed inside and out.

Every candidate now seems to talk about leaving Iraq eventually just like they all made statements about supporting the troops. So many of the statements ring hollow and tinny. But Latas and Salette speak from the heart with wisdom and have done so since day one. This is not just a political issue for them. This is life. I believe that is what we are going to need during the last two years of the Bush administration — we need people in D.C. who get it — who understand the military and the need for peace and justice as real life issues that impact real people. We need veterans representing us in DC who can act with impunity and from the wisdom of experience. Jeff retired from the military. He worked at the Pentagon. He served in Gulf War I. He knows D.C. He runs on clean money. He knows what it is to have to work in real jobs. He has faced death for his country — as has his son — and wants peace. And he has a remarkably intelligent and well spoken wife standing with him.

Some have questioned why I’m not backing a woman candidate. My father taught me to be a Democrat but also to always cast my vote for the best person. To automatically give my vote to a woman would be sexist. Jeff is a feminist. A feminist I respect married him. His stands support women and families. I have to look at how a candidate stands on the issues and my research has found Jeff Latas to be the person who walks and talks the most like a feminist through time (that means he has integrity) as well as the most qualified candidate for the needs that will have to be met in DC in 2007 and 2009. 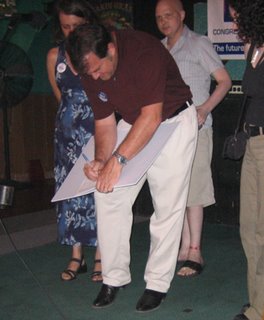 Last night I also really, really saw the intelligence and training necessary to face the environmental and energy challenges and crises, and stand up to the corporate greed that must be addressed in the next House session. And oh, by the way, Jeff publicly signed a pledge to take no corporate oil money… you can see Jeff signing the pledge (backed up–literally–by his family.) Talks the talk. Walks the walk. Check out his site carefully and you will be a Latas backer.