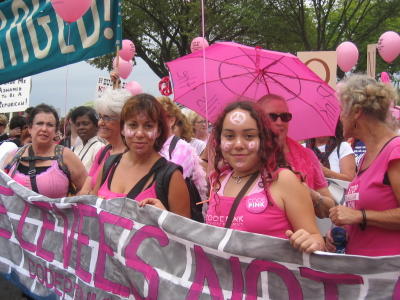 This is the first moment I’ve truly had to myself when I wasn’t exhausted and writing after midnight. I’m not a quick writer. I like to ponder and choose and rearrange and mull. Interruption is far more of a distraction to having the internal dialog that is writing than noise or passers by. The March was phenomenal, amazing, fantastic. As is always the case; it is difficult to know the true number of participants other than by processing crowd density and area covered from aerial photo processing. At one point a wave of active processing passed through the crowd as a message “CNN reports 600,000.” The permit was for 100,000. Some papers report 150,000. Others, 200,000. In any case the march was huge. Not as large as the march for women’s lives — closer in size to the marches just before the Bush regime invaded Iraq. 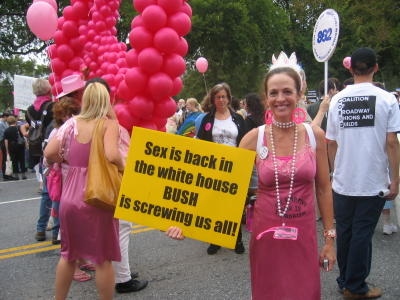 The waiting was hard, and a few cross words here and there were exchanged about positioning of banners and the bumping of signs and other trivialities, but 99.9 percent of the time there was a cooperative, calm determination, and appreciation of the jester in culture that greeted CODEPINK as we marched. I won’t go into the specifics of the line up of the CP rally at Freedom Plaza, or the hours of waiting near the ellipse for the march to start. No time right now. The only snafu was that the march snarled when its course turned at too sharp of an angle in too small of a space for the massive size of the march. 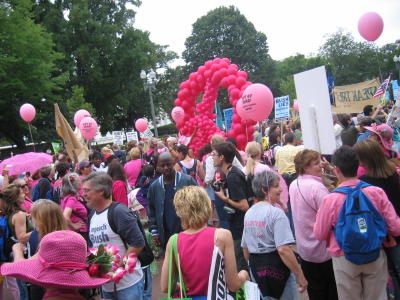 The most notable chants, signs and groups will get talked about over the course of the next few weeks as I process the event — but for now I’ll just mention a few. CODEPINK of course was a highlight! The huge pink collection of balloons tied together into a 15 ft. tall peace sign that lead the CODEPINK contingent was almost float/parade-like. (And that is a good thing. — I’ll do an entry on that later.) The sense of playful jestering that is essential to CODEPINK touches people in a way that anger cannot. Our drop dead gorgeous cheer-leaders/majorettes were a hit. 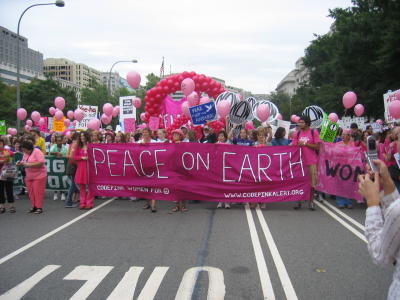 I also saw a group –NOT CODEPINK– doing “boobs not bombs” and the group of three people that depicted the devil controlling puppet reigns attached to bush and cheney was extremely effective.

I missed Steve Earle and really all of the music afterward, but collapsing on the grass near the Camp Casey on the Mall turned out to be a great synchronicity when I spotted Lee (from Tucson) and Arlington allowed me to connect with friends from Chicago for a great dinner. I am always amazed by the breadth and depth of the experience, intellect and humor of CODEPINK women whenever a group gathers together.

More later, but now I have to figure out how to get from here to American University for training for tomorrow’s lobbying actions. Then I want to hear the 4-6 panel of Stop The Next War Now author’s at the Green Fest at the Convention Center. And I’m not sure about this evening. Perhaps another dinner, perhaps some time writing and collecting thoughts. 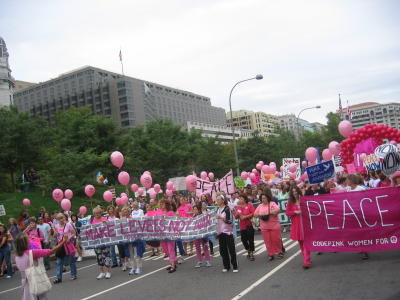