It started simply enough… Women coming together to draw attention to death and destruction continuing to happen in Iraq each day. So Codepinkers came from Tucson and outlying areas in Greater Metropolitan Phoenix to make sure the Democrats heard that the American people want us to get out of Iraq asap if not sooner!

First these ladies did what all good activists do before circling in with a specific tactic, they orbited an event by tabling at a friendly offshoot function. For the Pinkers it was the the Progressive Democrats mixer on Thursday evening. They intended to honor several folks with pink badges of courage but only one nationally and easily recognized person was there, so they presented Tom Hayden with a CODEPINK Arizona Pink Badge of Courage — it was actually a very small pinata… Hayden has been around for a while doing this stuff but that doesn’t mean he still doesn’t deserve kudos. Maxine Waters spoke later in the evening but many Pinkers had headed back to the Pink Hospitality Suite to coordinate Fridays plans — and they did not get to hear the energizing pink words of this peaceful but determined woman. 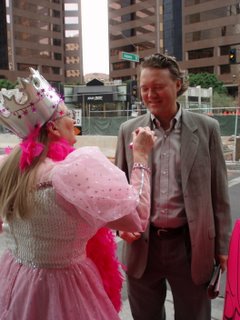 However,the suite got pinkified, and the finishing touches of magic dusted the Pink Fairy God Mothers who headed out the next day with baskets filled with wishes and goodies and pink balls of courage. The Fairy God Mothers (hereafter FGM) attempted to enter the public meetings but security wouldn’t let them in or even to stay on the sidewalks so they moved down to the corner of 1st and Adams and began to grant balls to Democrats that they could either accept and keep, or pass on to those more in need in the cojones department. These balls were immediately trendy chic in DNC circles and travelled the circuit of DNC folks with some men proudly sporting them on their lapels and with women passing them on to DNC people in dire need of balls. One woman with more cojones than most men presented Howard Dean with a pair. 🙂 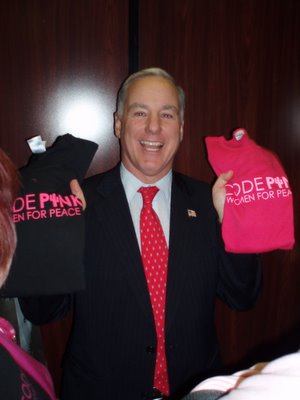 This wasn’t documented by the Pink Folk and people interested in photographing them were not allowed in either. Later in the day things loosened up a bit and CODEPINK T-shirt wearing folks could get in to the AZ Dem-sponsored evening mixer. Serendipity prevailed with he CODEPINK gals arriving at the elevator to the event simultaneously with Governor Dean — so they had opportunity to present Howard Dean with two CODEPINK T-shirts — one for his wife and one for him. At the elevator he recognized the pink ladies, smiled, and invited them to join him in the elevator. The suits he was with didn’t seem to like that, but he seemed pleasantly surprised that he was not getting pink slipped.

Maxine Waters also was in the pink ball loop, but her response to one of the FGM was one of dismay that no one from the DNC came out to stop the expulsion of the God Mothers. She says she will be out there on Saturday to show her support. That woman has ovaries!