The think I like about women’s activism is that it is like a bouncy session on a trampoline.  I visualize it as women standing on a web or net that overlays a map of the country or globe.  As a woman here or there becomes less active and sinks to a less active level, other raise up, and some are just bouncing like mad up to sky in near manic activity.

I’m going back to D.C. for a few days, the first time in almost three years, to catch up with all things PINK at the national level and to represent my family and friends in the OneNation March in D.C. on October 2nd. 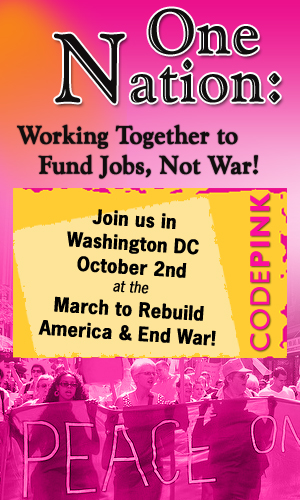 We all do what we can, and I have to tell the current admin that we are demanding the change for which we voted and worked.  Drones are criminal. War is not the answer to anything. Education and jobs and taking care of people are what we need — NOT corporate and mega-wealthy tax breaks and propping up the military industrial complex.  Jobs from war funding are tainted jobs.

In a way it is sort of sad as I will be missing a great Pink & Green event here in Tucson, more on that later, but I will be reporting back often from D.C. with tweets, posts, pics and more.

I will also be dancing the night away at Poets & Busboys with Alice Walker and CODEPINK supporters.

I’m staying in a hotel and if there are any snorers who don’t mind bunking in a double with another snorer (major!) then contact me about rooming.   I get dibs on soaking my feet after a day of marching and dancing though!

Previous Post: « Recap by David Swanson of August 29 D.C. Iraq War Teach-In @ Busboy's & Poets
Next Post: Day 1 of Being a CODEPINKer at One Nation Working Together »