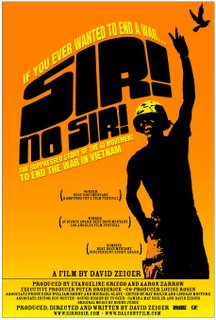 It is always difficult to determine patterns from within the design…but that is what I spend a good deal of my life trying to do. I am but a fiber temporarily interwoven within a living fabric. Not terribly a terribly important part, but still, over all I am a part of the design. Single actions from single folks can make for perceptible change. All of Fort McNair now knows about the documentary film , Sir No Sir, that deals with military history and Vietnam because of an attempt to suppress the dissemination of information about the film. This is such a perfect example of how feeding information or energy into a process, even by reacting against it, strengthens that original process.

That is one of the reasons I’m not big on protest or anger as those are reactions against something and as such are not particularly effective in creating change. As Gregory Bateson said, “Information is any difference that makes a difference.”

The challenge before the progressive community is to make a difference without inadvertantly strengthening the corporate/government stranglehold on our U.S. democratic Republic. Things really don’t change very much, very quickly, or very often. But perspectives, both individual and collective, change constantly. Perceptual change, that mental shift in perspective can be thought of as reframing. The reframing that occurred at Fort McNair was inadvertant, but conscious reframing can also effect change.

Now if we could only frame the highest high ups responsible for the torture at Abu Ghirab rather than the low level non-commissioned folks such as Cardona whose trial ended today (verdict has not been determined) who are taking the fall for indemic corruption at the highest levels of government in the U.S. (also non-coms, but in a very different way.)

Previous Post: « How much does the war & nuclear weaponry cost your community?
Next Post: Coupe d'etats, euthanizing corporations and reclaiming our voting rights. »