Best synthesis yet incorporating Robertson’s resignation, although still not mentioning the probable importance of the difference in type of surveillance used rather than just the audacity with which the Bushites thumbed their noses at legal procedure, rule of law, the U.S. Constitution, the American people….

A federal judge has resigned from the court that oversees government surveillance in intelligence cases in protest of President Bush’s secret authorization of a domestic spying program, according to two sources. 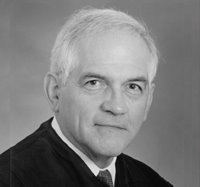 U.S. District Judge James Robertson, one of 11 members of the secret Foreign Intelligence Surveillance Court, sent a letter to Chief Justice John D. Roberts Jr. late Monday notifying him of his resignation without providing an explanation.

Two associates familiar with his decision said Tuesday that Robertson privately expressed deep concern that the warrantless surveillance program authorized by the president in 2001 was legally questionable and may have tainted the FISA court’s work.

The most important aspect of this resignation may be what it brings to light such as implications in the following statements of judges and sources close to FISA:

The news also spurred considerable debate among federal judges, including some who serve on the secret FISA court. For more than a quarter-century, that court had been seen as the only body that could legally authorize secret surveillance of espionage and terrorism suspects, and only when the Justice Department could show probable cause that its targets were foreign governments or their agents.

Robertson indicated privately to colleagues in recent conversations that he was concerned that information gained from warrantless NSA surveillance could have then been used to obtain FISA warrants. FISA court Presiding Judge Colleen Kollar-Kotelly, who had been briefed on the spying program by the administration, raised the same concern in 2004, and insisted that the Justice Department certify in writing that it was not occurring.

“They just don’t know if the product of wiretaps were used for FISA warrants – to kind of cleanse the information,” said one source, who spoke on the condition of anonymity because of the classified nature of the FISA warrants. “What I’ve heard some of the judges say is they feel they’ve participated in a Potemkin court.”