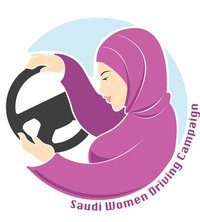 It is well into Friday June 17th in Saudi Arabia as I write this and women there are demonstrating their ability and right to drive.  That is right. Drive. A car.  Women’s voting rights are restricted there.  Similarly it is forbidden for women to drive.   They’ve been arrested.  Watch the You Tube video for which  Manal al-Sharif  was arrested when she uploaded it.  The video is of  her driving and talking about the about the driving ban and her feelings of hope that women were volunteering to join the Saudi Women Driving Campaign.

In the Washington D.C. women drove around the Saudi Embassy, encircling it,  in Foggy Bottom on Wednesday to show their support. My favorite support action thus far is the protest in Kiev where topless members of FEMEN demonstrated in front of the Saudi Embassy.

Some have already reported success without problems, but one report’s link to an image of a woman driving has already gone “empty.”  The world is watching!   And commenting.    And supporting!!!