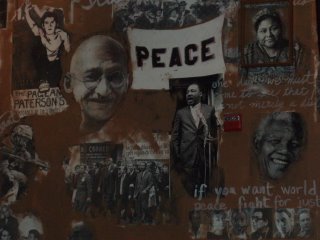 My recent trip to DC connected me with some signigicant sources of information. I feel these channels are essential to liberty. Jim’s Eclectic Blog by a DAWN (District of Columbia Anti War Network) member illustrates the fanstastically informative nature of blogs. I need to be reading blogs from D.C. that cover, as in reporting, demonstrations, protests, and CD (that’s activist lingo for civil disobedience… you know like those trouble makers Ghandi and King engaged in.)

We should not have to be the media, but we do have to be. We have to issue press releases, do our own photography, videography, and write our own articles. Where the hell is the media, the press, the fourth estate??? We should not have to do all this documentation for the public record. I try to cover aspects that are not being covered, but I’m not impartial. I really don’t have time to cover all sides of issues. That is the purpose to which the press evolved. Doing all these jobs drains us energetically, but we are up to the task. We allow other aspects of our lives to slide… for me it is a biography of Gene Stratton-Porter that isn’t getting written, and developing a Greening of Management Training Program for my consulting business, and cleaning my house. But I digress….

Anyway, this morning as I was reading a forwarded email about the continuing harassment of DAWN activists for legal, protected forms of demonstration, I clicked through to read Jim’s blog, I realized that I had digital photos that no one else was apt to publish from the action at Rumsfeld’s house on May 18th. So, for free flow of information’s sake, here is a bit more info about the impromptu action at Rumsfeld’s house. 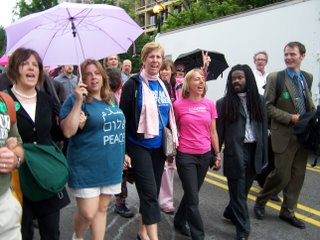 DAWN first came to my attention when I marched to Rumsfeld’s House with a few dozen other folks after the Network for Spiritual Progressives Prayer Action. My CODEPINK friends Katie and Toby were arrested with two guys from DAWN. Katie just wanted to deliver a note to Rumsfled and Toby was going through the hedges after Katie as she didn’t want Katie to be arrested alone. I think Toby might have gotten her pink umbrella hung up in the hedge. — Note to self: drop props before any stealth operation. — This was a first time arrest for both women. 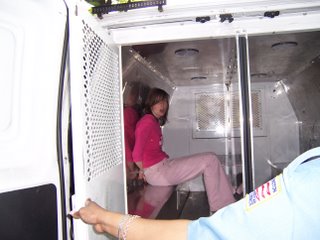 My goddess, I am so inspired by these women who were both at a time in their lives when they were willing to be arrested to draw attention to the war criminals who are waging for profit corporate warfare and writing off the murder of hundreds of thousands of people as a necessary expense of their ill-gotten gains. These women are peace soldiers. Katie could have been hurt or killed. DC jails are not fun places. Neither my friends nor the other women with whom they were held who had been arrested and were being held for a myriad of charges were given water or food for over 24 hours. 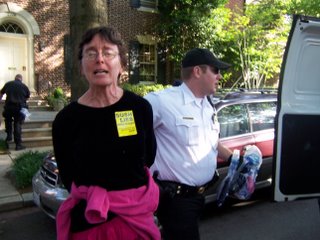 This is apparently standard procedure. Denying fluids can kill people — it is torture. There is a war on our own people and torture is being used on us just like it is in the bases used in extraordinary rendition, in GITMO, in Abu Ghraib… it may be a tad more sublte, varying in degree, but it is just as immoral and reprehensible and a classic example of a slippery slope. We apparently tolerate torture in our lots of our jails, such as in Chicago.

I think we need to bring back the common usage of terms such as ill-gotten gains, profiteer, carpet bagger, yellow journalism, jingoism, propaganda and sensationalism — and thus the nuances of meaning between motive and reporting. Just a thought.

Photo credits: All photos © Julia Field, 2006 excluding the photo of the Ghandi and King section of a wall at Busboys and Poets that is mine and which you may use but which I would like an attributive link back per the creative commons license for all non-copyrighted materials on this site.