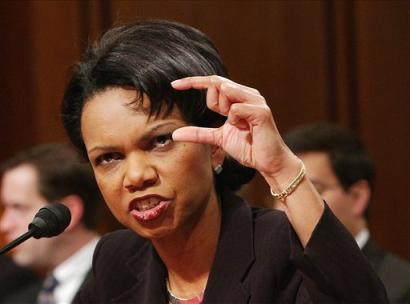 Could we have gotten it wrong? Condi likes girls and George is … well, you fill in that blank?

The Ratbang Diary (what a great name!) does Madsen’s report (that George and Condi’s dangerous liaison is what forced Laura to move out to the Mayflower Hotel) one better. Now don’t get your knickers in a knot… just take a moment and think about it.

That’s right… but I still don’t want to give up on the Madsen story. It would be such a totally ironic twist — the goddess has a such sense of humor sort of turn about! And given all the despair and darkside machinations we have to live with every day these days, well, it sort of livens things up a bit to draw sociological mustaches in on laugh out loud fantasies that depict Condi as more than an uptight bee-ah-ch and Georgie as something other than a snide addictive personalitied fortunate son.

Now you tell me, who is covering for whom?