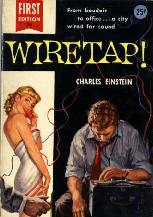 We must start a massive boycott/stoppage of all communication companies who cooperated and turned over any of our information to the NSA.

Which ones? Well this c|net article gives some information about which companies cooperated and and which did not. As soon as we (the progressive media, indy media and progressive bloggers) get some verification I will be stopping all contracted services with any collaborators.

More on this soon!

But in the mean time, here are some of the best links I’ve found on the spying on us/lying to us/big-brother-is-here issue.

When Google is not your friend. It’s only a matter of time before other attorneys realize that a person’s entire search history is available for the asking, and the subpoenas begin to fly. This could happen in civil lawsuits or criminal prosecutions.

EFF sues AT&T to stop NSA spying. The Electronic Frontier Foundation (EFF) has filed a lawsuit against both the old and new versions of AT&T, alleging that they have illegally cooperated with the National Security Agency’s (NSA) recently revealed domestic wiretapping program. A related lawsuit was filed against the NSA itself several weeks ago by the American Civil Liberties Union (ACLU). In that suit, the ACLU requested an end to the spying program, on behalf of “prominent journalists, scholars, attorneys, and national nonprofit organizations (including the ACLU) who frequently communicate by phone and e-mail with people in the Middle East.”

Electronic Privacy Information Center is doing some interesting stuff too.

And well, the name Big Brother Watch says it all and has a GREAT collection of links to other stories… like this one from Wired.

And even though I’ve mentioned it before… do check out The New Tech Behind the NSA Spying Case. Wiretapping isn’t the proper description of what is going on. It is data storage and data mining.