This is a follow-up to an earlier post about Diane Wilson, one of the co-founders of CODEPINK Women for Peace, and author of An Unreasonable Woman

who legally infiltrated a Cheney/Delay fundraiser last week in Houston where she was arrested for speaking her mind. 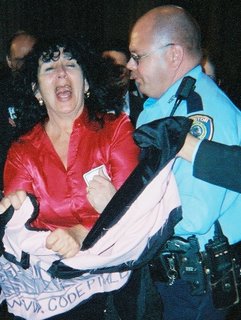 Why is Diane Wilson still in jail after the Cheney/Delay fundraiser in Houston last week? (And this is while corporate and political goons who have stolen pensions, misappropriated funds, accepted bribes, and contributed to the increasing lack of access to essential needs in life by American service and blue collar workers run free with their lies and graft.)

At first after the arrest it looked like everything would turn out more or less in Diane’s favor as the Indymedia article, Diane Got Sprung, suggested in that Diane’s bail was posted largely thanks to the outpouring of generosity from the activist community. But by that time the police had figured out that Diane had the little outstanding matter of a previous jail term she had failed to serve for criminal trespass. Seems like they could have been a tad more considerate and not accepted the bail money if they were going to keep her on another charge. But as reported in the second follow up article in the Indymedia article, bail was posted about 48 hours after Diane had been taken into custody.

Close friends who had the chance to talk to Diane said she was going crazy and ready to be released. After taking several thousand dollars in bail money the authorities changed their course of action. Wilson’s partner waited for hours after driving in from Texas City only to learn that Diane wouldn’t be released.

She was instead transferred to the Calhoun County Jail where she will serve her time for a previous criminal trespass conviction.

The former conviction was for climbing and dropping a banner from a tower at the DOW Chemical Plant in Seadrift, Texas. According to an article on the India Together site: 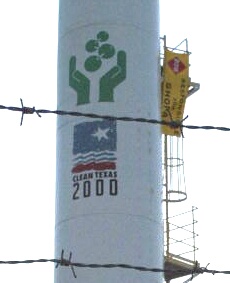 On August 26th, a 52-year-old shrimp farmer who had been on hunger strike for 29 days in solidarity with the Bhopal movement broke into the Dow/Union Carbide facility in Seadrift, Texas. Diane Wilson climbed the main tower, hung up a 12 feet banner that said “Dow – Responsible for Bhopal” and chained herself to the structure. She was later hauled away by police and arrested. “Even after 18 years, almost 30 people still die every month as a result of long-term effects of the exposure in 1984. Dow has a moral, legal responsibility to fully rehabilitate the Bhopal survivors,” she said via her cellphone from the top of the tower.

Weak from the effects of her hunger strike she did not have the strength nor stamina to get down from the tower. She had to get the attention of a security guard in order to request help getting down from tower. If it had not been for that, it is unlikely she would not have been apprended, arrested, or convicted on criminal trespass.

Trespass charges often bring light sentences or are dismissed. After complying with all the court hearing formalities, Diane, a mother of five with one special needs adult child still in her care, decided she could not accept the harsh sentence of 120 days imposed at that time.

It is three years later now, and Katie Heims reports, “While she was planning the Houston action, Diane and I were discussing the possiblity of her going to prison for a long time. She was in some ways, looking forward to it because she was tired of living out of bags these past couple of months. Also, she really missed writing. She was desperate to get back to the second book she’s been working on.” 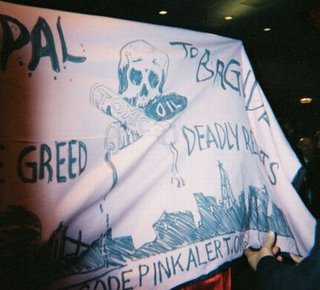 Her currently pending hearing for removing and displaying her wrap that had a message written on the inside of it and shouting “Corporate Greed Kills, and Iraq kills too!”at the Delay fundraiser and to which she had a legitimate invitation/ticket, has been postponed until she’s served her time at Calhoun County.

Katie provided additional information: The $1500 raised and paid as bond money will take 4-7 weeks until the the check is returned and contributors can be repaid. The judge, however, has raised her bond pending settlement/time served in Calhoun County and her return to return to deal with Harris County. Diane’s attorney hopes to be able to have this reduced at a later date. In the event she’s convicted in Harris County, she will get credit toward any punishment she might receive. The attorney would like to have the sentence reduced from 120 days to 90 days.

She is not allowed to receive items such as books, but Katie suggests that articles, crossword puzzles or newspaper cuttings, and greeting cards could be included in letters of support.