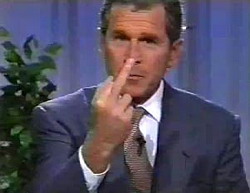 “Holy shit, Batman! Gotham is in the hands of an evil villain, and he’s flipping us off.”

That’s right, even comic sidekicks ought to be able to see the danger in allowing a man who can say, ‘It’s just a goddamned piece of paper!’ to stay in the highest office in the land and when he has sworn to uphold and defend the constitution of the United States.

From Capitol Hill Blue, per a meeting in the White House during November 2005:

“Mr. President,” one aide in the meeting said. “There is a valid case that the provisions in this law undermine the Constitution.” “Stop throwing the Constitution in my face,” Bush screamed back. “It’s just a goddamned piece of paper!” 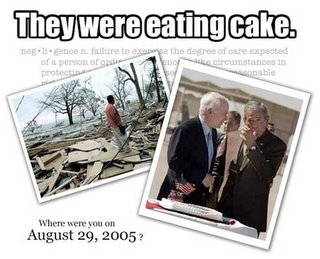 Doug Thompson stated in the Rant in Capitol Hill Blue on December 9th,

“I’ve talked to three people present for the meeting that day and they all confirm that the President of the United States called the Constitution “a goddamned piece of paper.”

And, to the Bush Administration, the Constitution of the United States is little more than toilet paper stained from all the shit that this group of power-mad despots have dumped on the freedoms that “goddamned piece of paper” used to guarantee.”

I’m stunned that even he would be so cavalier as to say these things in front of others. I have believed for quite some time that Bush is pure evil. Not stupid, not uninformed — but a megalomaniac who genuinely dangerous to all life on earth — he has no respect for anything outside of his sphere of control. 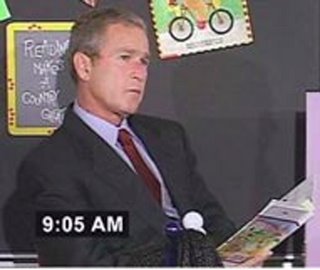 Every blogger worth his or her salt ought to broadcast this statement with its source far and wide until the media picks it up and the people in that meeting come forward to corraborate what Bush said.

Also broadcast Bush giving the finger, per above.

And Bush eating cake in Phoenix with McCain while Katrina was hitting LA.

And this picture of Bush on September 11, 2001 in a catatonic stupor of shock, fear or stupidity should never be forgotten either.