This fierce sidespin into total politica mode for the last however long has been fun, but I have to shift perspective for a while. I really don’t like politics, but I cannot seem to stop paying attention to the political as I live in interesting times.

My favorite mental masturbation is to sit zenlike and contemplate trajectories of “if this goes on” sort of scenarios of our society and earth. trends pop out at me that others don’t seem to see until they’ve become routine in my thoughts. Yes, at times i can be visionary. we all are. we build futures from our visions. what we contemplate, envision, and ponder tend to be where we try to aim our travels. We must be careful what we think. Nothing mystical there, really, it is just that visualization points goals and actions toward an outcome. It is more likely to happen if pointed to.

That is why recently I’ve been vacillating between two paths of action for the next year. I feel like I’ve been working nonstop to do my little part to reactivate/recreate the democratic aspects of my country that have been stolen from me by those corrupt individuals in power at the moment.

I really want to work on building my writing business, do things with my daughter when there is opportunity to do so in the two remaining years she will be at home, and get rid of some persistent headaches I have.

But a part of me feels I have to keep dedicating a very significant portion of my time/life to activism this coming year. Even though the corrupt insular Bushite regime is fracturing, there is much work to do to to get a House of Representatives and Senate that will prosecute the illegal and in some cases treasonous actions of this administration to some degree.

Larry Beinhart illustrated the need for just such concentration and continuation of efforts this next year in his article, Subpoena Power to the People, on CommonDreams.org.

I suspect I am not the only person who is feeling these contradictory emotions.

One part of me says, “Ah, just relax; the administration is crumbling. You did good.”

Another part tells me, “Our sons and daughters and innocent Iraqis continue to die each day to build obscene wealth for the Bushites. You can’t stop until we’ve carefully pulled back and then out of Iraq so that the country will become whatever it will become even if it is three different countries. 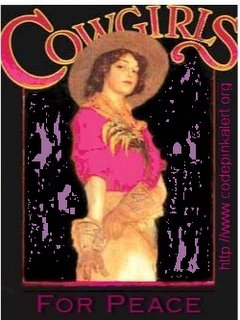 Another part says, “Be active and find another creative way to infuse women’s wisdom and ways into the poltical.” I don’t want to do the same old thing. Ruts and I don’t get along. I don’t like being in situation where other folks start to develop expectations for my behavior. Perhaps I’m a control freak… or perhaps I am just a drifter at heart (too many Clint Eastwood movies as a kid.)

I’m thinking street theater, freeway blogging, getting a professional looking website up for my writing business as well as getting my two avocational websites back up and running, painting my kitchen to look like a Frida Kahlo painting, but not traveling around other than in-state and maybe slightly just into CA or CO, or NM to raise pink hullabaloo. I’ve committed to one access television program. I am falling into total disgrace in helping a rep. get a bill introduced into the AZ House that I was supposed to help with. So I’m not going to commit to anything this year as I hate not fulfilling my commitments or stressing about them, so this year — independent pink activist central. If anyone wants to join me fine, if not fine… eitherway… but I gotta make sure nothing becomes entrenched in my activism as predictable, hierarchical or structured — it isn’t truly woman-based activism if it isn’t an egalitarian weblike process.

Previous Post: « Bush on the Constitution: 'It's just a goddamned piece of paper!'
Next Post: FISA Judge Resigns, Intrigue Deepens »